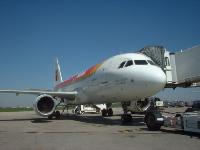 A fourth weekly flight to operate on Thursdays. Iberia launched flight to Romania in March 3rd, 2007. In first three months, it has carried more than 13,000 passengers on the route. Average cabin occupancy: 84.6%

Iberia has decided to raise the number of flights between Madrid and Bucharest in July and August, to meet the higher demand for seats in the summer months.

Starting tomorrow, July 5th, Iberia will operate a fourth weekly flight between Madrid and Bucharest, departing on Thursdays from Terminal 4 at Madrid-Barajas airport at 08:40 h. and arriving at Bucharest’s Otopeni airport at 13:25 h. The return flight will take off from Bucharest at 14:15 h. and land in Madrid at 17:10 h.

Iberia launched its service to the Romanian capital on March 3rd, with two weekly return flights, and it added a third at the end of March. To date, more than 13,000 passengers have been carried on the route, and seat occupancy has averaged 84.6%, reaching 87% in June.

The aircraft used on the route are 171-seat Airbus A-320s with Business Class. Passengers flying Business Class can enjoy extra room and comfort, as well as the exquisite meal service designed by the renowned chef Sergi Arola. They also qualify for three days free VIP parking, an exclusive check-in area, and use of Iberia’s Goya and Velázquez VIP lounges at T4 in Barajas.