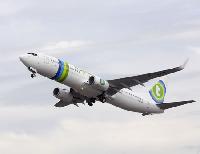 SEATTLE — Boeing previously delivered a 737-800 to Babcock & Brown for lease by transavia.com in May. Transavia.com plans to add three additional 737-800s in 2008 and two in 2009. The 737-800s are configured in a 186-seat, all-economy layout. Air France and Transavia established transavia.com earlier this year, with 60 percent and 40 percent ownership, respectively. The new airline will operate an all-Boeing fleet of 737-800s, serving destinations such as Porto, Portugal; Girona, Spain; Palermo and Catania in Sicily; Heraclion in Crete; Monastir and Djerba in Tunisia; and Agadir and Oujda in Morocco.