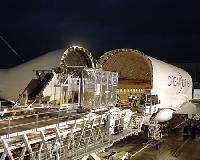 Final assembly for the all-new Boeing [NYSE: BA] 787 Dreamliner is one step closer with the April 24 arrival in Everett of the horizontal stabilizer.

EVERETT, Wash — Manufactured by Alenia Aeronautica at its facility in Foggia, Italy, the horizontal stabilizer is transported in five pieces – the left and right stabilizer, two elevators and a center. The shipment configuration measures nine feet wide, 13 feet high and is 42 feet long. It was delivered to Boeing late yesterday via the Dreamlifter, a specially modified 747-400 used to transport 787 major assemblies. The horizontal stabilizer was loaded into position in the 787 final assembly bay earlier today. The completed assembly has a wing span of approximately 62 feet and measures 32 feet fore/aft.

„In the coming weeks we will receive other major assemblies for the first Dreamliner,“ said Scott Strode, 787 vice president of Airplane Definition and Production. „This is a very exciting time for the program.“

The 787 Dreamliner is the fastest-selling airplane in aviation history, with firm orders for 544 airplanes from 44 airlines.