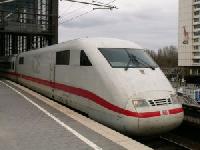 Qantas said today it would commence a new codeshare arrangement with German rail operator Deutsche Bahn between Frankfurt and seven cities in Germany from 1 May.

“This is Qantas’ first codeshare arrangement outside of Australia with a rail operator and it will provide our customers with an opportunity to tour Germany in two-class seating with views a little closer to the ground,” he said.

Mr Gurney said that the daily rail services complemented Qantas’ air services. “Our daily flights arrive in Frankfurt at 0550 with rail services departing approximately 90 minutes after landing, depending on the destination.

“ICE trains are quiet and fully air-conditioned, with luggage space in each coach and a bistro service offering snacks and meals as well as a wide selection of hot and cold drinks,” he said.

Vice President Sales Channel Management of Deutsche Bahn, Thomas Drexler, said: „We are very pleased that Qantas has entered this codeshare agreement with us. It shows that the airlines as well as their passengers acknowledge comfortable, reliable and environmentally-friendly feeder options.”

Reservations for the new codeshare services can be made via Qantas on 131313, or through licensed travel agents.