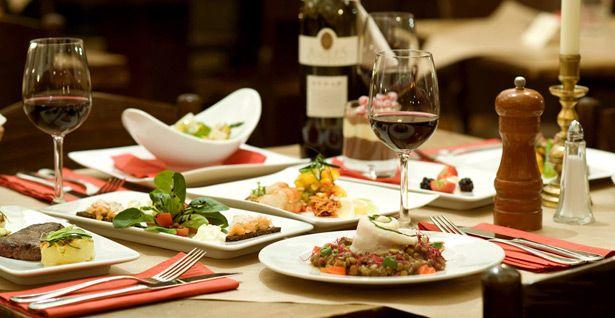 Berlin – It’s easy to take a culinary world tour in Berlin, but the trend right now is clearly toward native German cooking. Many of the new restaurants that have opened recently are focusing on regional products and reinterpreting German cuisine.

The “mesa” in the Grand Hyatt at the Potsdamer Platz has just redone its menu, and contrary to what might be expected from the Spanish name, the team working with restaurant manager Steffen Sinnig is preparing not Spanish, but rather but German tapas-style dishes. These are placed in the middle of the tables so they can be shared with others, and they include the Swabian specialty Maultaschen ravioli with sautéed onions, Königsberger Klopse meatballs with capers, and baked black pudding with puréed Linda potatoes. They are also served with German wines from winegrowers in various parts of the country.

At the Heinrich in the Mitte district, on the other hand, the focus is on German dishes from the 1920s and 1930s. For weeks, owners Florentine Joop, an artist, and chef Heinrich Beckmann visited antiquarian bookshops and searched through old cookbooks for forgotten recipes. “Our menu has dishes on it that we knew and loved from our parents and grandparents,” says Beckmann, and they have been reinterpreted. One very popular item is the “Proud Heinrich”: bratwurst with a hearty dark beer sauce over mashed potatoes.

New Berlin cuisine is being served in the Volt at Paul-Lincke-Ufer in Kreuzberg, where Matthias Gleiß has been cooking since October. Entirely new interpretations of traditional Berlin dishes and German home-style cooking are presented in the halls of this former transformer station. For example, the Beelitz rabbit is served with marinated scallops and just a bit of cinnamon butter. The thirty-nine year-old chef is always on the lookout for nearly-forgotten products. He rejuvenates classics like ragout fin or Grießflammerie (a semolina-based Bavarian cream), and he is happy to let legumes take the lead role.

Another notable restaurant in Kreuzberg, albeit not quite as genteel, is “3 Schwestern” in the Kunsthaus Bethanien – the motto here is “fine food and primitive rock ’n‘ roll”. The owners attach great importance to freshness and get their products mainly from the surrounding area. A different lunch is served every day, and the evening menu includes Northern German fare like matjes herring and Southern German dishes like cheese spaetzle. According to Michael Böhl, who runs the restaurant together with Wolfgang Sinhart, one especially popular dish is the roast Apfelschwein, which is roast free-range pork that was fed a diet that included apples.

Southern German cuisine is especially popular in the German capital. The Augustiner at Gendarmenmarkt, which opened a year ago, offers Bavarian food such as Weißwürste and Leberkäse in a classic brauhaus atmosphere. And Spätzle & Knödel in Friedrichshain likewise serves good hearty dishes from Southern Germany, including crisp-roasted pork and Serviettenknödeln (delicious slices of bread dumpling). The restaurant Eckbert Zwo, which moved from Neukölln to Kreuzberg in October, is known for its Baden-style Flammkuchen (a tarte flambée). On Sundays, the menu also includes the traditional Sunday roast.