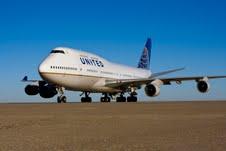 United Continental Holdings unveiled the largest aircraft in its fleet, the 374-seat Boeing 747-400, in the new United livery

CHICAGO – United Continental Holdings, Inc. unveiled the largest aircraft in its fleet, the 374-seat Boeing 747-400, in the new United livery. With the first 747-400 rebranding completed, the carrier now has at least one of each of its mainline fleet types painted in the new United livery. The company has completed painting 309 mainline and regional aircraft, which is more than 20 percent of its total fleet. The ongoing visual rebranding of the company will accelerate in the months ahead, and customers will begin to see rebranded airport facilities and new advertising.

United Continental Holdings, Inc. (NYSE: UAL) is the holding company for both United Airlines and Continental Airlines. Together with United Express, Continental Express and Continental Connection, these airlines operate a total of approximately 5,675 flights a day to 372 airports on six continents from their hubs in Chicago, Cleveland, Denver, Guam, Houston, Los Angeles, New York/Newark Liberty, San Francisco, Tokyo and Washington, D.C. United and Continental are members of Star Alliance, which offers 21,000 daily flights to 1,160 airports in 181 countries. United and Continental’s more than 80,000 employees reside in every U.S. state and in many countries around the world.For more information about United Continental Holdings, Inc., go to UnitedContinentalHoldings.com. For more information about the airlines, see united.com and continental.com, and follow each company on Twitter and Facebook.