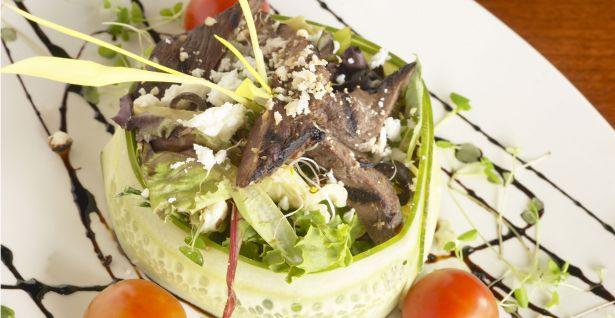 The Restaurant Scene in Berlin is Distinguished by Creative, Independent Chefs

Berlin – At first glance, there appear to be hardly any changes in the haute cuisine of Berlin. With thirteen Michelin stars in twelve restaurants, Berlin remains the gourmet capital of Germany, just ahead of Hamburg (eleven restaurants) and Munich (ten restaurants).

But if you look at the details, you can make out an exciting trend in Berlin’s constellation of culinary stars: first-rate cuisine is increasingly breaking away from the large five-star hotels. Fine dining in Berlin is being shaken up by independent and unconventional chefs in the courtyards and trendy districts. And the city finds that to be quite agreeable: the experts – whether the Guide Michelin, Gault Millau, Feinschmecker Guide, Schlemmer Atlas, or Varta Guide – have all honored Berlin chefs with high scores, many spoons or chef’s hats, and of course the much-coveted stars.

Just recently, for example, two Michelin stars began shining over the alternative district of Kreuzberg. One of them is due to Stefan Hartmann, who runs his restaurant “Hartmanns” in the basement of a quiet residential street and prefers to collect the mushrooms for his autumn dishes by himself. For example, the menu includes marinated shank of veal with sautéed chanterelles, or poached char with baked and puréed cauliflower. In addition to the modern cuisine, the Michelin testers also praised the “beautiful and quite intimate ambience” of Hartmanns Restaurant.

As for the other star, award-winning chef Tim Raue brought it with him, as it were, when his workplace shifted from the Hotel Adlon to the trendy Kreuzberg neighborhood. At the end of 2010, he ended his collaboration with the five-star hotel and realized his dream of striking out on his own together with the support of his old team from “Ma”. His new workplace, which he opened in August 2010 in a former gallery near Checkpoint Charley, is called simply “Restaurant Tim Raue”. Here, the master chef remains true to his Asian-inspired style, which he describes as a “combination of Japanese product perfection, Thai flavors, and Chinese culinary philosophy”. A concept that has already worked well at “Ma” and has now succeeded once more in winning over the testers of the Guide Michelin. The fact that Raue has been able to retain his status with a second Michelin star in spite of the recent change of restaurant is a genuine achievement.

Another chef who has gone independent and set up outside of the large hotels is Daniel Achilles, whose new restaurant is called “Reinstoff”. As an original site for the new venture, he sought out the historical factory ambience of the “Edison Höfe” in Berlin Mitte. He cooks there under the motto “expanding the senses”, and his efforts earned him a Michelin star in 2009, which he retained this year.

For the third year in a row, the pole position in Berlin’s culinary scene is occupied by the chef Christian Lohse of the restaurant “Fischers Fritz” at the Regent Hotel. The Guide Michelin has awarded him two stars. Similarly, Gault Millau has given him nineteen points, putting him at the absolute forefront of German chefs, because he “elicits the native flavors of the best possible ingredients without disguising them or imposing artificial effects.”

As the name “Fischers Fritz” suggests, these ingredients include above all fish and seafood. And especially lobster, which is used in delicious preparations of not only the choice, individual parts, like the tail or claws, but also a real rarity: homard à la presse – fine lobster mousse, prepared in a silver lobster press of French origin, the only one of its kind in Germany. Another original specialty of Stefan Lohse is “onsen egg“. For this dish, which is inspired by the Japanese method of cooking eggs in hot springs, the eggs are cooked in sulfurous water.

Elsewhere, the gourmet guides this year have practically heaped praise on Michael Hoffmann from the restaurant “Margaux”. The Feinschmecker Guide named him “Chef of the Year”. An honor that comes just in time for his anniversary, considering that Hoffmann has now been running his own restaurant for ten years without the financial support of a large hotel. Typical for the Margaux are the finely crafted, onyx-adorned walls and above all the “creative green direction” of the cuisine. Michael Hoffmann makes the vegetable the most important thing on the plate and thrills his guests with dishes like “aspic of braised and smoked pepper” and “chickweed ice cream”. The vegetable menu lists “some of the most exciting things to eat right now in Germany,” says the Feinschmecker Guide.

Gault Millau even sees Hoffmann as the leading representative of a countrywide trend which “is increasingly drawing the attention of German master chefs to the role of vegetables in our cuisine, which is still fairly modest in this country.” Michael Hoffmann cultivates the majority of his vegetables himself in a 2,000 square meter (half acre) garden near Potsdam, including rare varieties like Black Prince tomatoes and exotic root vegetables. The precious greens receive his full attention both in the garden and in the kitchen. For the cooking, only mineral water is used. An expense that does not go unnoticed by the palate: Gault Millau raves about a “supremely colorful intoxication of the senses (…) that transports the guests, leading them to entirely new pleasures” and awards the Margaux eighteen points out of a possible twenty.

According to the Feinschmecker Guide, another up-and-coming chef to keep an eye on is Sauli Kemppainen from Finnland, who cooks at the restaurant “Die Quadriga” at the Hotel Brandenburger Hof. Visitors will discover many Scandinavian delicacies here that are otherwise scarcely ever seen in Berlin: cloudberries, pine sprouts, or burbot, for instance. The dishes are supplemented by an outstanding selection of German wines. With 1,250 selection wine list, it was honored by the Feinschmecker Guide with the award for the “best assortment of German wines”. And the Varta Guide concurs with this recommendation. It gave the “Quadriga” three diamonds out of a possible five.

Because of personnel changes in the kitchen, two of the three Adlon restaurants, Ma and Gabriele, have lost their Michelin stars. But that does not mean that things will stay that way for long. After all, over the past year, Berlin’s hotels seemed to have a knack for choosing their successor chefs. Hendrik Otto from the “Lorenz Adlon” immediately succeeded in retaining the star that his predecessor, Thomas Neeser, had acquired. Some even believe the professed sauce fetishist could possibly be awarded a second star.

Another culinary master who has held his own is Matthias Dieter, the new chef at the gourmet restaurant “First Floor“ in the Hotel Palace as of April 2010. In the autumn of the same year, his restaurant was counted among the top three in Berlin in the Schlemmer Atlas ranking. The culinary guide awarded him 4.5 out of 5 spoons. That puts the First Floor in the same league as Fischers Fritz and Hugos. Gault Millau gave Matthias Dieter one star and named Gunnar Tietz at the First Floor the “Sommelier of the Year“.

The restaurants Facil, Rutz Weinbar, Hugos, and VAU likewise succeeded in defending their stars and impressing the demanding Michelin inspectors with culinary masterpieces.

In addition to the candidates for a Michelin star, Berlin also offers other worthy culinary discoveries. Every year, trendy new restaurants bring together top-notch chefs and modern ambience. Among the “best restaurants for the in-crowd”, the Feinschmecker Guide lists the classic “Borchardt” and, for the first time this year, the “Grill Royal” on Friedrichstraße.

A good insider tip or two can always be found in Marcellino’s Restaurant Report, in which Berliners rate their favorite restaurants themselves. Here, the “Borchardt” is again listed among the “Hot Places” in Berlin. New entrants in the top ten of the “Premium” category include “Il Nuevo Cristallo” in the Zehlendorf district, and “dos palillos”, which opened in early 2010 in Berlin Mitte. “dos palillos” is also successful in the category “sexy food“, where it took first place straightaway. This new restaurant, located on the ground floor of the boutique hotel “Casa Camper”, serves ultra-modern creations with Asian influences, such as ankimo, or Japanese-style monkfish liver. Visitors are especially fond of the “Tasting Menus”, in which up to sixteen courses are coordinated into an overall work of art. Another unusual feature is the seating arrangement: all of the guests sit at a single long table with a view of the kitchen.

The Guide Michelin joins in the praise of “dos palillos”, not for its fashionable credentials, however, but instead because of the good value for the price. In its category “Bib Gourmand”, the gourmet guide lists restaurants that offer “good food at moderate prices”. Other new listings in this category are the “Alpenstück“ and the restaurant “Neu“.