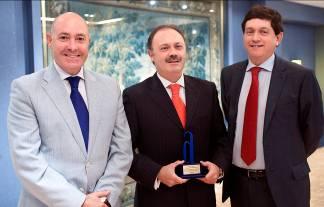 Iberia was chosen as the best airline on routes to South America in the 18th annual Travelranking awards, given out by the Spanish travel magazine Agenttravel.

Madrid – The award was handed over in the Hotel Melià Castilla, in Madrid. Víctor Moneo, Iberia’s Spain Sales Manager, took it on behalf of the company.

Each year Agenttravel conducts a poll of more than 800 Spanish travel agents to indentify the best suppliers of travel services in the year, including hotel chains, wholesalers, and airlines. For another year, Iberia was picked “Best Airline on Routes to South America“, where the Spanish carrier boasts a 20.1% market share.

This is not the first time Iberia has been chosen as best airline. This year it was also distinguished by readers and users of the travel website muchoviaje.com as the best airline in 2009, and by the Spanish Geographic Society as the company with the best business initiative of 2009. For the seventh consecutive year the oneworld alliance to which Iberia belongs was voted best by travel professionals In the World Travel Awards survey, and also by the Skytrax international consulting firm, after a 10-month study of 18 million passengers from more than a hundred countries.