Riga Races Ahead of its Neighbours in Attracting Tourists 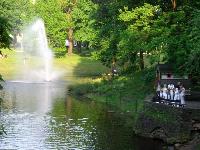 Riga Races Ahead of its Neighbours in Attracting Tourists

Attracted by lower prices in hotels and restaurants, and the marketing campaigns under the city brand LIVE Rīga, the number of travellers have been steadily increasing to Riga since the year end in 2009, helping the Latvian capital to outpace its neighbours.

Riga – Tero Taskila, Chief Commercial Officer of airBaltic: “We see that successful city branding, if done professionally, brings immediate and clear results – for example, in December Riga attracted twice as many visitors from Moscow as Helsinki and six times more than Tallinn managed to attract.

Over the recent years Riga improved greatly for visitors by actively building new high-standard hotels. Now they have become extremely traveller-friendly with prices going down to historic low levels – 4-star hotel rooms are as cheap as EUR 35-40. Combined with cheaper meals in restaurants, cheaper services and entertainment, it makes Latvia perfectly priced for visits.”

The number of visitors to Riga has increased at the year end in 2009. airBaltic saw an increase in passenger numbers from all of the countries in which Riga was advertised as part of Live Rīga campaign. In December 2009, the greatest increase in comparison to the same period in the previous year was seen in travellers from Finland (+139%), Russia (67%), and Lithuania (48%), as well as Estonia (30%), Norway (28%), Germany (11%) and Sweden (11%).

For 2009 airBaltic has announced 20 million EUR preliminary profit, and achieved 6% passenger growth to 2.75 million passengers. In 2010, airBaltic will open at least nine new direct routes to improve access to Riga, and has so far announced new routes from airports including Madrid, Belgrade, Vaasa, Umea, Beirut, Amman, and Manchester. A full schedule of airBaltic flights can be found on the company’s homepage at airbaltic.com.