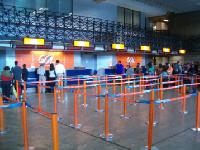 GOL Linhas Aéreas Inteligentes S.A. (BM&FBOVESPA: GOLL4 and NYSE: GOL), the largest low-cost and low-fare airline in Latin America, began selling tickets for a new destination in its domestic route network – the city of Bauru, in the west of São Paulo state.

São Paulo – There will be five flights per week from Congonhas Airport in São Paulo city, beginning on February 1, 2010.

„We are launching regular operations in Bauru in the wake of our success in Presidente Prudente (SP), a destination that handled around 50 passengers a day before GOL moved in and now generates more than 200 tickets per day.“, explained Constantino de Oliveira Junior, GOL’s CEO. „We expect the same GOL efffect at this new destination, the 50th in our domestic network.“

Bauru is the biggest city in western São Paulo and one of the state’s leading economic centers, with a GDP of R$ 5.3 billion. It is 345 km from São Paulo city and has a population of around 359,500 people. The new route to Congonghas will benefit clients from the entire surrounding region by connecting them immediately with the country’s main business markets, including Belo Horizonte (Confins), Brasília, Curitiba, Florianópolis, Navegantes, Porto Alegre, Rio de Janeiro and Salvador, among others.

The table below contains more details of the new operation: