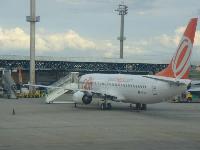 Throughout 2009, the company increased its presence abroad through code-share agreements, expanded the SMILES, Gollog and Voe Fácil programs and implemented several innovations in the Brazilian market

Today, with its GOL and VARIG brands, the group offers the most extensive and convenient route network in South America with more than 800 flights per day to 59 destinations in 9 countries.

Certain decisions were vital for the company’s immediate success: operating a modern and standardized fleet of Boeing 737 New Generation aircraft, utilizing the internet as the company’s main sales channel (paperless tickets), focusing on innovation and technology to boost results and investing in a highly efficient and committed team to guarantee excellence in service quality.

„We are proud to have transported more than 130 million passengers since the company was launched in 2001. Thanks to GOL, more people can travel by plane, the fastest, safest and most convenient transportation. We believe there are many more who have the conditions to fly but have not done so yet. In other words, we have a long growth trajectory ahead of us,“ declared Constantino de Oliveira Junior, CEO and co-founder of the company.

GOL’s ninth year was marked by a series of innovations and achievements, including: