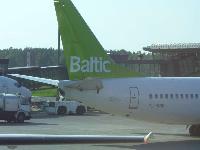 Rīga – The Latvian national airline airBaltic informed the media today as to its vision about the future development of the Rīga International Airport and the need for a new terminal.

Air Baltic President and CEO Bertolt Flick: “Over the last several years, the Rīga airport has undergone rapid development.  Despite the complex situation in the world’s aviation industry, airBaltic has increased passenger flow at its home hub in Rīga by more than 30%.  The infrastructure of the Rīga airport reached its design capacity in 2007, but thanks to the airport‘s efforts and improvements, it will be possible to service the constantly increasing number of passengers until 2011.  Beyond 2011, further development and any increase in passenger numbers at the Rīga airport will not be possible without a new terminal.  This means that we must get down to work immediately, because otherwise we will risk losing our competitive edge.“

Elīna Egle, General Director of the Latvian Confederation of Employers:  “At a time when the economy is weak and nearly 180,000 people are suffering unemployment, I welcome the fact that private businesses are prepared to invest in development and the creation of new jobs.  I might add that the aviation and transport sector in Latvia has long since been demonstrating high productivity indicators in comparison to other European Union member states.  These are ‘smart’ jobs with a high level of added value.  The sector has also made a substantial investment in the growth of other sectors of the economy in recent years.  These investments will not only strengthen Latvia’s leadership positions in the Baltic aviation market, but also make it possible in the short term to create jobs in the construction industry.  In the long term, the same will be true for those who work in the hospitality industry, offer commercial services or transit services, etc.”

Economist Jānis Ošlejs, Board Chairman of Primekss:  “The international airport is enormously important for the national economy.  Foreign investors find it important to fly to Latvia easily so that they can visit their factories.  For many sectors in the economy, particularly electronics, it is convenient to be close to a major airport so that spare parts and finished products can be sent easily.  It’s easy to bring in tourists if it’s easy for them to fly to a country.  That’s why any expansion of the airport is a very supportable idea.”

Žanete Jaunzeme-Grende, Board Chairperson of the Latvian Chamber of Commerce and Industry:  “We are delighted that one of the country’s largest exporters of services is prepared to manage the future development of the airport’s infrastructure, attracting private sector investments and promoting employment.  The expansion of the airport will also facilitate the export capacities of members of the Chamber of Commerce and Industry.”

The Air Baltic proposal is to build a terminal that will initially be able to handle 7 million passengers by 2014.  The terminal will handle 40 airplanes an hour during peak hours– nearly 5,000 passengers per hour.  Total investments in the project will amount to more than EUR 92 million.  The investment is to come from the private sector and will not require any state participation in terms of financing or guarantees.