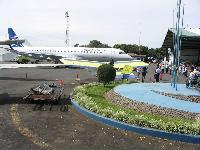 Panama City – 1. Available seat miles – represents the aircraft seating capacity multiplied by the number of miles the seats are flown

3. Load factor – represents the percentage of aircraft seating capacity that is actually utilized

Copa Holdings CEO Pedro Heilbron said, „We are very pleased with our traffic results for December, having grown RPMs by 6.6% in spite of capacity increasing by only 2.9%. Furthermore, we are very pleased to have achieved double digit growth for 2009 despite weaker regional economies and the H1N1 flu crisis which affected us earlier in the year. This truly demonstrates the resiliency and growth potential of our business model.“