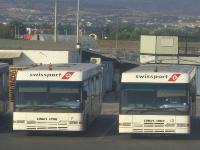 Swissport is concerned about the present situation at Geneva Airport, where some of its personnel have been engaged in strike action (with the support of the VPOD union) since last weekend.

Zurich/Geneva – Swissport’s management in Geneva had further contact and discussions with the union yesterday (Monday), though the talks failed to produce positive results for the time being. Swissport remains open to further discussions but can not afford to meet the tremendous union expectations.  The continued resulting irregularities in Swissport’s ground handling operations are currently minor, and are being kept to a minimum through the assistance of management staff, airport partners and additional personnel from Zurich and Basel.

The present industrial action has its origins in last autumn’s Collective Working Agreement (CWA) negotiations, in which 84% of voting Swissport Geneva staff approved the new (and slightly improved) employment terms and conditions.

Swissport has long been regarded as a very loyal and progressive employer which has consistently shown consideration and a sense of perspective while establishing itself as the world leader in the dynamic airport ground handling industry. The Executive Management of Swissport Switzerland has also been able to offer sensible and viable working terms and conditions to its Zurich and Basel-based staff for 2010, and deeply regrets the present situation.

PUSH, Swissport’s other social partner, signed the new CWA in December, and is not involved in the current strike action. The VPOD, by contrast, continues to insist on substantial further improvements in its employees’ working terms and conditions that are unacceptable and inappropriate given the present state of the aviation sector: following a calamitous 2009, IATA expects its member airlines to suffer a further aggregate loss of over
USD 5 billion for 2010, a result that will also have its knock-on effect in the ground handling field.

Despite these developments, Swissport’s management has offered the union constructive proposals, including the continuation of talks with a neutral mediator.

The proposals would also be subject to the immediate ending of the present industrial action. Regrettably, these reasonable proposals have been rejected by the VPOD representatives. As a result, the Geneva strike action is currently set to continue for an indefinite period. The situation at 14:00 on Tuesday 5 January:

•    Around 25 persons are involved in the present strike action, which is continuing.

•    The strike action is affecting baggage sorting activities mainly. Additional Swissport staff has been drafted in
from Zurich and Basel to support the Geneva workforces.

•    The resulting delays have been substantially reduced from the levels seen at the weekend, and the situation here continues to improve. The missing bags will be delivered and distributed with immediate effect.

•    Geneva Airport and the airlines affected are being kept fully informed of all developments.

•    Swissport thanks all its customers and business partners for the understanding they are showing in this exceptional situation.

•    Further information will be provided as soon as more details about the current development are available.

Swissport International Ltd., which is owned by Spanish-based Ferrovial, one of the world’s leading infrastructure and service corporations, provides ground services for over 70 million passengers and 3.5 million tonnes of cargo a year on behalf of some 650 client companies. With its workforce of around 32 000 personnel, Swissport is active at 179 airports in 38 countries on five continents, and generated consolidated operating revenue of CHF 1.9 billion (EUR 1.25 billion or USD 1.9 billion) in 2008. www.swissport.com / www.ferrovial.com