Arrival of airBaltic – Event of Year 2009 in Tartu 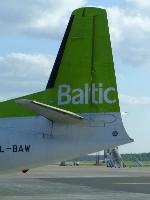 Arrival of airBaltic – Event of Year 2009 in Tartu

Launching of international flights from Tartu airport was announced as the Event of Year 2009, according to a vote of local residents, and a certificate of recognition was handed to airBaltic in Tartu City Hall today.

Riga/Tallinn – On July 3, airBaltic was the first airline to start international flights between Riga and the second largest city in Estonia offering convenient connections to destinations in Western Europe, Scandinavia, the CIS and the Mediterranean region.

airBaltic Chief Commercial Officer Tero Taskila: „We are delighted that airBaltic wrote history as the first airline to offer an international route from the Tartu airport. We have been satisfied with performance so far and are extremely happy that Tartu residents voted it Event of Year 2009. We take it as a sign of sincere appreciation! Tartu is a beautiful destination and airBaltic flight attracts increasing numbers of foreign travellers from Western Europe, Scandinavia, Mediterranean region and CIS, who leave money in the region’s economy.“

airBaltic started Riga – Tartu with four weekly flights on Fokker 50 aircraft. For the winter season, airBaltic offers daily and double daily flights on the route. One-way ticket prices start at LVL 29 (EURO 41), including airport and transaction fees. The route schedule is available on the company’s homepage at www.airbaltic.com.