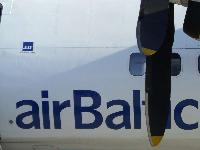 Today, December 21, 2009, he four millionth passenger to arrive at the Riga International Airport this year arrived on an airBaltic flight from Brussels today. Her name is Linda Kimeisa.

Riga – airBaltic president and CEO Bertolt Flick: “The airline has increased the passenger numbers at its home airport of Riga by one-third, which offers proof of airBaltic success in developing the chosen transit strategy. The achieved results of airBaltic have allowed the company to not only become the Airline of the Year, but also one of biggest exporters in the country. We’re delighted that the image of the Latvian capital city of Riga has attracted increasing number of tourists from Scandinavia, Germany and Russia.”