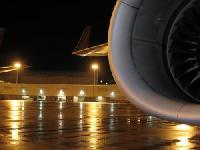 Southwest Airlines and its Oakland Employees today are celebrating the airline’s 20th year of service at Oakland International Airport (OAK).

Additionally, Southwest Airlines will be celebrating with its Employees and Customers today with a 1989 themed party. The carrier is totally „stOAKed“ to be hosting the celebration at its gates in OAK, complete with decorations and costumes from the 1980s. Southwest Airlines will have an ’80s karaoke contest for Customers and Employees. The carrier will also facilitate „gate games“ where Employees will ask ’80s trivia questions and Customers will have the chance to win some „totally awesome“ ’80s prizes! Follow @SouthwestAir on Twitter to find out about the exciting events going on throughout the day.

After nearly 38 years of service, Southwest Airlines, the nation’s leading low-fare carrier, continues to differentiate itself from other airlines –offering a reliable product with exemplary Customer Service. At Southwest Airlines, there are no hidden fees. Customers can check their first two bags for free (size and weight limits apply), there are no fees for a window or aisle seat, and, as always, snacks, sodas, and smiles are all complimentary!

Southwest Airlines is the most productive airline in the sky and offers Customers a comfortable traveling experience. Southwest offers all premium leather seats and plenty of legroom with a young all-Boeing 737 fleet. Southwest Airlines (NYSE: LUV) currently serves 65 cities in 33 states. Based in Dallas, Southwest currently operates more than 3,300 flights a day and has more than 35,000 Employees systemwide.