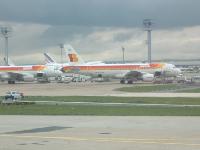 The airline will operate three weekly frequencies (on Tuesdays, Saturdays and Sundays) to Croatia’s top tourist destination from July to September, while it will offer two flights a week in June and October

Madrid – Iberia’s first flight to Dubrovnik will depart tomorrow from Madrid airport’s Terminal 4 with a seat occupancy of more than 85%.

The Spanish airline will fly to Dubrovnik from June 7th to October 12th and will operate three return flights on Tuesday, Saturdays and Sundays in July, August and September. In June and October, it will offer two weekly flights, on Saturdays and Sundays, between Madrid and the „Pearl of the Adriatic“.

The aircraft to be used on the route are Airbus A320s, equipped with a Business Class section.

Iberia thus becomes the sole airline to connect Madrid and Dubrovnik. The company expects to carry more than 14,000 passengers on the route during the summer months and has scheduled these flights to facilitate connections to its other network destinations, especially in Spain and in the Americas.