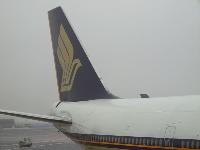 Singapore Airlines will launch its inaugural flight to Houston tomorrow, on 20 March 2008. SQ 62 will depart Singapore Changi Airport Terminal 2 at 0945hrs and is expected to arrive at Houston’s George Bush Intercontinental Airport at 2220hrs (all times local).

In celebration of this special occasion, customers will be treated to a breakfast buffet at the gate-hold room before boarding. The return leg of the trip – SQ 61 – will take place on the same day with the aircraft departing Houston at 2355hrs and arriving in Singapore on March 22 at 1130hrs.

The Boeing 777-300ER, fitted with the Singapore Airlines’ new luxurious cabin products in all three classes, will operate the new route. The new cabin products include the ultra-wide Business Class seat, configured in a 4-abreast, 1-2-1 configuration with every seat having direct access to the aisle. Seats in all three classes feature the new KrisWorld, with over 1,000 entertainment options, with full audio and video on demand, and a suite of office applications.

A variety of dining choices await customers departing from Houston, including American fare with a Texan influence such as biscuits and gravy, barbeque beef briskets, and broiled steak with fried eggs under the Airline’s Popular Local Fare Programme.

Houston is the fourth passenger city served by Singapore Airlines in the United States, after San Francisco, Los Angeles, and New York. The four-times weekly service, via Moscow, provides the only direct air link between the Russian capital and Texas in Southwest USA.

Singapore Airlines Executive Vice-President Marketing and the Regions, Huang Cheng Eng, says the new route will strengthen the Airline’s presence in the United States. “We are pleased to welcome Houston to Singapore Airlines’ growing network of destinations. Houston is the fourth largest city in the United States, and a key energy center. Its strategic location on the Gulf Coast, makes it an ideal gateway for the Southern USA to Singapore and Southeast Asia. We believe this new route will prove popular to both business and leisure travelers alike.”

Customers interested in booking flights and viewing fares for flights to Houston should visit singaporeair.com

SQ62 departs from Singapore Changi Airport Terminal 2.  Passengers should proceed to Terminal 2 to check-in for this flight.