Czech Airlines Preparing a Number of Ecological Projects this Year 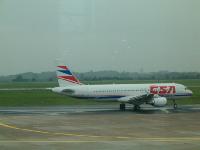 Czech Airlines Preparing a Number of Ecological Projects this Year

Passengers, on their own, can now ascertain the volume of emissions released into the air.  An emission calculator has been launched on the Czech Airlines website.  One can select a particular flight and easily and quickly calculate the volume of emissions that it would release into the air.  The result can be compared with other modes of transport.  In the future, Czech Airlines will also organise an air quality improvement project, in which passengers will be able to get involved.  They will have the option to pay a voluntary fee based on the specific emissions volume, and such fees will then be used to finance the project.

The Czech Airlines emission calculator can be found at:  csa.cz/cs/portal/company/about_us/environment.htm

In 2004, Czech Airlines decided to introduce an environmental management system, in line with the international standards ISO 14001.  The Airline had to identify the significant environmental impact of its activities and set up a system to minimise them.  The outcome of the four-year process of implementing the norms is a functional environmental system that will be tested through an independent certification audit in the second half of this year.

Another innovation of 2008 is the airline’s own waste separation line, which has been in operation since March.  With it, the amount of sorted waste from on board our aircraft, as well as from other operating activities, will increase significantly.