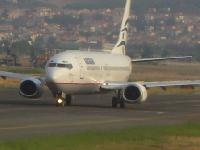 Aegean Airlines builds on successful expansion with the delivery of new Airbus A320/321 and service to new destinations with the start of its summer 2008 flight schedule.

Stansted Airport is London’s most modern airport and the third busiest in Britain, serving 23.8 million passengers and 158 destinations. Stansted has excellent rail connections to the city centre and also offers rapid access to the financial heart of London.  In addition, operating at a less congested London airport allows passengers to have a more pleasant and relaxing travel experience.

Beginning May 2 Aegean will also begin daily service to Tirana using a 112-seat AVRO RJ 100 jet. This is Aegean’s third destination in the region, after Sofia and Bucharest and significantly improves its coverage of the Balkans.

New domestic destinations with flights to Limnos and Kefalonia.

On March 30th Aegean will launch service four times weekly RJ 100 service to the island of Limnos. Frequency will increase to daily beginning May 1st, Also on May 1st Aegean will begin flights to Kefalonia with four weekly RJ 100 flights, increasing to 6 weekly in July and daily in August.

With these two destinations, Aegean Airlines now serves 23 domestic routes (16 from Athens and 7 from Thessaloniki) which account for 98% of potential domestic demand.

More connections between Greece and Cyprus

With these additions, there will be an average of 6 daily flights between Larnaca and Athens, Thessaloniki, Heraklion and Rhodes this summer.

The main features of the new summer flight schedule are highlighted below:

• 1 new non-stop seasonal flight between Rhodes and Larnaca
• 1 additional non-stop flight between Heraklion and Larnaca
• By the end of June, London, Milan, Rome, Larnaca, Düsseldorf and Stuttgart will be operated by new Airbus A320/321s, extending the use of these aircraft beyond Frankfurt and Munich.

• Increased flights between Thessaloniki and Mykonos and Santorini

During 2008, Aegean expects to take delivery of 10 new Airbus A320/321 as part of its investment programme. By June 2009 Aegean plans to replace its 15 Boeing 737s with all new Airbus aircraft, which will give it the youngest fleet in Greece.