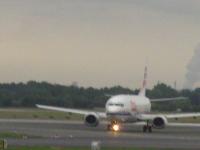 In the Airbus final assembly hangars in Hamburg, Germany, work is being finished on the first of Czech Airlines’ new planes for 2008, an Airbus A319.

The aircraft, which is presently being prepared for test flights, will be accepted by Czech Airlines technicians in mid-February.  The airplane should arrive in Prague, in Czech Airlines’ new corporate colours, on 21 February.  Overall, Czech Airlines will receive four new aircraft of this type from Airbus this year.

Czech Airlines deploys its most modern aircraft on its priority routes.  Passengers will thus encounter the new Airbus A319 on medium-haul routes, i.e., primarily in Europe.  The Airline will deploy the new aircraft on flights from Prague to Brussels, Madrid, Amsterdam, Frankfurt, Düsseldorf, and Milan, as well as to Odessa, Sofia, Riga, and Samara.  These aircraft will also fly to the new destinations to be introduced by Czech Airlines in 2008, such as Almaty, Tbilisi, Rostov-on-Don, and Damascus.

The new aircraft will replace the fleet’s classic-generation Boeing 737s, which the Airline has operated since 1992.  The continuation of the renewal of our medium-haul fleet in 2008 is, as in previous years, financed from external banking sources, making use of the guarantees provided to Czech Airlines by European export agencies for the financing of aircraft purchases.  “They made that decision on the basis of the airline’s 2007 results and the approved business plan for this year, which counts on further growth in revenue, and a profit of CZK 400 million,” said Vice President for Finance Luboš Černý.

The first Airbus A319 that Czech Airlines will receive this year is now prepared in the Hamburg plant for test flying.  Two other airplanes are being assembled at this time.

Czech Airlines will receive the second jet in March, and the third in April.  The delivery will then be completed by the fourth Airbus A319 planned for this year, which Czech Airlines expects to receive in September.

Czech Airlines’ chose the new generation Airbus A319/320 for its medium-haul fleet in a 2004 tender.  Based on that tender, Czech Airlines received three aircraft in 2006, five last year, and four will be obtained this year.  Furthermore, last year, Czech Airlines decided to exercise the advantageous option for another eight aircraft of the same type, to be supplied in 2011–2012.

Assembling Airbus A319 Aircraft in the Airbus plant in Hamburg
A319 aircraft are assembled in the Airbus plant in Hamburg, Germany.  The assembling of an airplane from parts manufactured in several EU countries takes about 25 days. In the hangar where airframes are assembled, individual aircraft body parts manufactured by Airbus factories in France and Germany are assembled, wings from the UK and tale surfaces from Spain are attached, and then cabin interiors are finalised.  The aircraft is then moved to another hangar, where engines are fixed in engine pods.  For Czech Airlines, the engines are manufactured by the CFM International S.A consortium.  And finally, the aircraft spends five to six days in a paint shop, where it is painted in Czech Airlines new colours.

New Aircraft
All of the new aircraft will be supplied to Czech Airlines with a configuration for two classes – Business and Economy.  Modern in-flight entertainment systems will be available on board, which allow for, among other things, the provision of current information about the flight on a top-level audiovisual system, using LCD screens placed above the passengers’ heads.  The new generation aircraft also offer passengers more comfortable travel, in the form of more spacious and broader cabins and larger overhead storage bins for their baggage.
The new A319 aircraft will be powered by engines manufactured by the CFM International S.A. consortium.  The aircraft have a roughly 1,200 km longer range than the classic-generation Boeing 737s, and are approximately five percent faster.  They are very economical to run, due to lower fuel consumption, lower maintenance costs, and better performance on short runways.  Their operation is also environmentally “cleaner”, i.e., the jets comply with stricter noise and emission norms.
The new generation aircraft bring further technical progress to the Czech Airlines fleet.  An example is the deployment of the distance data transmission system between the aircraft and the ground.  One of its first applications to have been used is the automatic transmission of reports on the status of the aircraft on-board systems to a technical centre on the ground.  By this means, maintenance can start resolving any irregularities before the aircraft lands.  This head start is then reflected in the reduced number of delays and greater availability of the fleet.