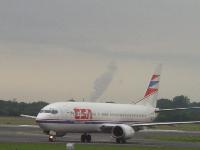 With the Christmas and New Year holidays approaching, in keeping with our practice, certain operational changes will be made to Czech Airlines’ flight schedule.

Service to traditionally strong destinations will be beefed up and, on the other hand, service on less sought-after routes will be temporarily reduced.  Six airplanes will be in the air at midnight on Christmas Eve, while the New Year will be celebrated on-board by Czech Airlines’ passengers travelling to Tel Aviv and from New York to Prague.

The Christmas mode of operation will start on 24 December at 5 p.m.  Until 26 December, the flight schedule will be temporarily modified to suit passenger demand.  This year, flights to the Russian metropolis of Moscow will be enhanced, as well as to St. Petersburg, Samara, Athens, Rome, and Stockholm.  On the other hand, flights will be reduced on such routes as Beirut, Riga, and Warsaw.  At midnight on Christmas Eve, Czech Airlines will have a total of six airplanes in the air: its scheduled flights to Larnaca, Tel Aviv, Yerevan, Samara, and Thessalonica, and one charter flight, to Hurgada in Egypt.  On Christmas Day, its new charter flight to El Salvador in Central America will take off for the first time.  The passengers on airplanes headed from Prague to the Israeli metropolis of Tel Aviv, and from New York to Prague, will welcome in the New Year on board.

In general, the greatest demand for tickets on heavily utilised routes comes in the days running up to Christmas Eve and the two subsequent Christmas holidays, and then on 27, 28, 29, and 30 December, and then again in the first days of the New Year.

Czech Airlines’ charter flights will primarily carry Czech tourists to Egyptian resorts during the holidays.  In addition to Hurgada, mentioned earlier, Czech Airlines jets will also land in Sharm el Sheikh and Taba.  Clients of foreign travel agencies and tour operators will be carried by our planes to Prague, primarily from Greece and Italy.

The Christmas atmosphere arrived on board Czech Airlines planes in early December.  During Advent, passengers can listen to Christmas carols and also the interiors of our aircraft are decorated with Christmas themes.  Standard head-rest covers have been replaced with covers with Christmas motifs, and the cutlery sets provided with refreshments include serviettes with Christmas themes and a chocolate surprise.

Czech Airlines – the largest national carrier in the new EU member countries, in terms of the number of passengers carried.  In 2006, the Airline carried a record 5.5 million passengers.  Since 2001, it has been a member of SkyTeam, one of the leading global airline alliances.  Czech Airlines currently offers connections to 108 destinations in 43 countries worldwide.  The fleet comprises 50 aircraft – ATR 42s/72s, Boeing 737s, and Airbus A310/A319/A320/A321s.  In the first half of 2007, Czech Airlines ranked first in on-time flight performance, among the 26 member airlines of the Association of European Airlines (AEA).

For the last four years, Czech Airlines has been selected as the “Best Airline Based in Central/Eastern Europe – 2004, 2005, 2006 and 2007”.  This title is awarded annually by the Official Airline Guide (OAG) and is based on the votes of frequent business travellers.

In 2007, the Airline also won the “Best Airline in Central Europe” award, bestowed annually by the independent British organisation Skytrax, as a part of The World Airline Awards ranking, based on the votes of millions of passengers from all over the world.  Czech Airlines also won the “Best Airline in Eastern Europe” Award (the Annual GT Tested Awards) for a second year running. On the basis of the results of an annual readers’ survey, the American magazine Business Traveler awarded Czech Airlines “Best Airline in Central and Eastern Europe”.  Czech Airlines was also on the shortlist of the eight best world airlines in 2005.